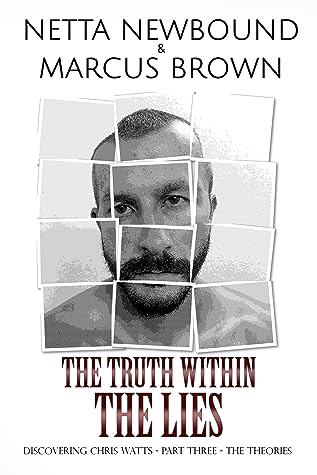 The Truth Within the Lies: Discovering Chris Watts: - Part Three - The Theories Details

So, some of you have no doubt been following this case since the first news item aired, some of you have only just discovered the Watts’ case since watching the Netflix documentary, some of you may have read both books 1 and 2 in this series and there will no doubt be others who haven’t read or watched anything and this is your first introduction to what happed that fateful night 13th August, 2018. With those in mind, I will recap briefly the series so far…

In Cold Blood: Discovering Chris Watts - Part One - The Facts
We guess it’s safe to say most people will have heard of the Watts case. Christopher (Chris) Lee Watts, the dashing, seemingly genteel, affable man who murdered his entire family in a calculated attack that shocked the entire world. Shanann Watts, his pregnant, incredibly beautiful wife whose life was snuffed out because her doting husband decided he wanted a fresh start. Bella Marie and Celeste Cathryn (CeCe) Watts, adorable sisters who worshipped their father, the very man who suffocated them both in cold blood using their comfort blankets against them. He then went on to dispose of their tiny bodies into huge tanks filled with toxic crude oil. Nico Lee Watts, Chris and Shanann’s unborn son.

During this series we will look at the facts, the police investigation, the evidence, hear Chris Watts’ explanation and his reasoning. We will try to make some sense of what occurred during the early hours of August 13th 2018. We will endeavour to present to you all aspects of the case, right from the initial investigation and how it unfolded, to the first and subsequent confessions all transcribed word for word (where possible) from actual video and audio footage obtained from the FBI’s Discovery Files.

A Deal With the Devil - Discovering Chris Watts - Part Two - The Facts
At the end of book one, Chris Watts had finally confessed to murdering his beautiful family and disposing of their bodies at an oil field.

In part two, we focus on…
•… the grim discovery and recovery of the bodies.
•… the chilling details of the autopsies.
•… the remaining police interviews of Nichol Kessinger.
•… the Plea Deal.
•… the sentencing.
•… Chris Watts Prison Interview.

What to expect in this book…

The Truth Within the Lies: Discovering Chris Watts - Part Three – The Theories

For anyone new to this case, the first thing they ask is why? And unfortunately no amount of reading, or watching, or studying will answer that for you. The only person who knows the absolute truth is Chris Watts himself, and for some reason he has refused to confess all up to now. Oh yes, he’s confessed to much of it, but there are so many discrepancies, changed statements, obvious lies and omissions. The online True Crime Community is rife with scenarios and theories and some of them are eye-poppingly, jaw-droppingly valid. So we’ve given you the facts, and now we intend to put forward some of the theories to see if we can work out which truths have been weaved through the lies and vice-versa.

Please note: These theories are not the opinions of the authors and in no way are they saying these events are actually true. But they are most definitely food for thought…

A Path to Forgiveness (The Midnight Series, #14)

With My Last Breath (The Midnight Series, #15)

Irreparable: Three Lives. Two Deaths. One Story that Has to be Told.

We Thought We Knew You: A Terrifying True Story of Secrets, Betrayal, Deception, and Murder

After Dark: The Series

My Daddy is a Hero: How Chris Watts Went from Family Man to Family Killer

The Truth Within the Lies: Discovering Chris Watts: - Part Three - The Theories Reviews